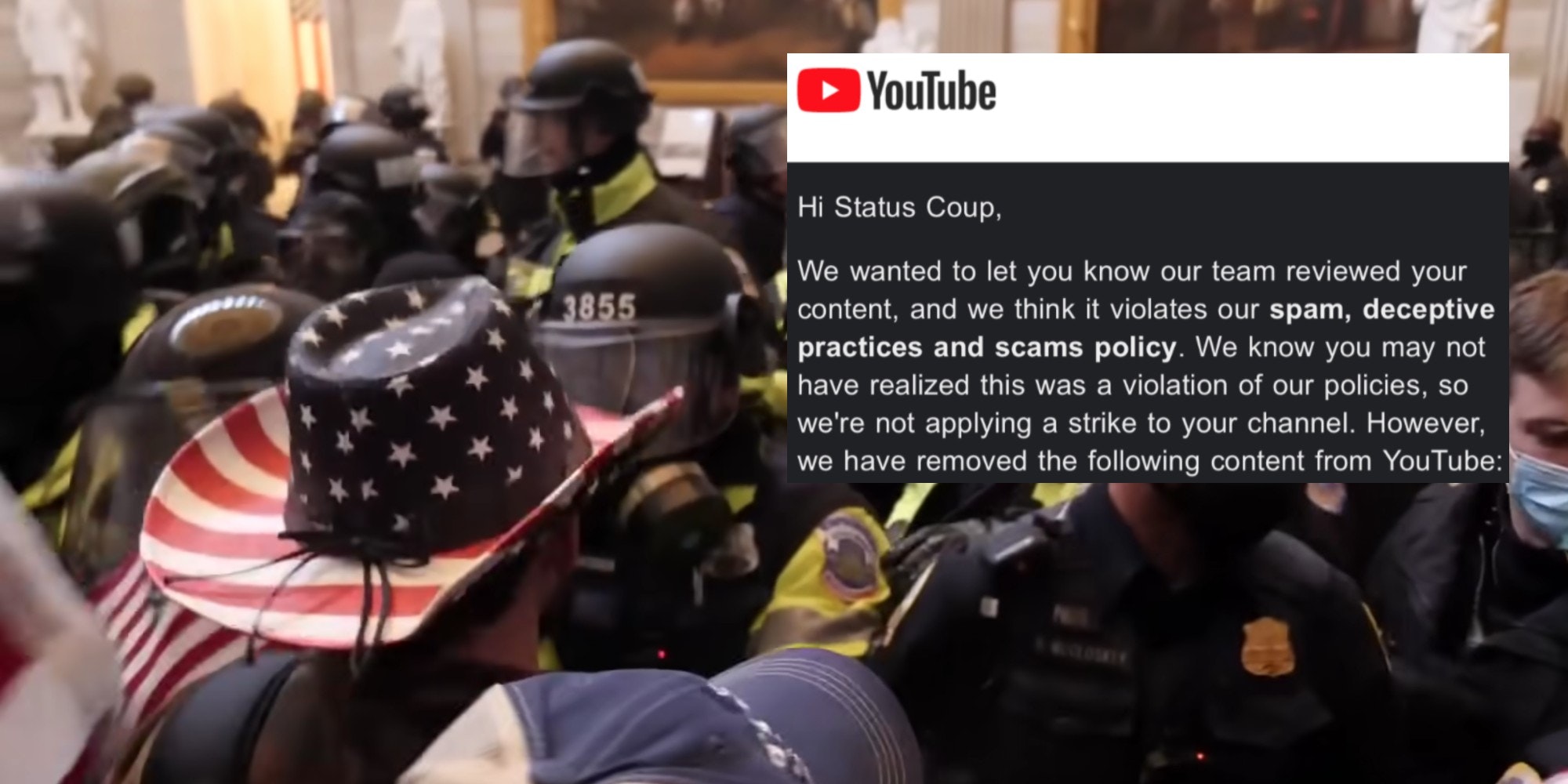 Numerous journalists who covered last month’s violent insurrection in the nation’s capital say their content is suddenly being removed from YouTube.

The independent media outlet Status Coup News, which posted Capitol riot footage to YouTube last month captured by freelance videojournalist Jon Farina, revealed on Tuesday that its video had been taken down.

YouTube, according to Status Coup News journalist Jordan Chariton, asserted in an email that the clip violated its “spam, deceptive practices and scams policy.”

YouTube also appeared to suggest that Farina’s video, which has been repeatedly featured by mainstream outlets such as ABC, CBS, CNN, and NBC, promoted false narratives about the integrity of the 2020 presidential election.

“Content that advances false claims that widespread fraud, errors, or glitches changed the outcome of the U.S. 2020 presidential election is not allowed on YouTube,” an email from the company states.

While such moderation policies can often be applied mistakenly, Farina and Status Coup News are not the only ones affected.

Ford Fischer, a popular videojournalist and co-founder of News2Share, also reported having footage he captured during the Capitol attack purged by YouTube.

Fischer stressed the historical importance of the footage in a tweet on Tuesday by noting that it has been cited by lawmakers in the impeachment case of former President Donald Trump.

“Hey @TeamYouTube, the impeachment memorandum released by the Democrats literally references moments I filmed in this documentary footage video you removed,” he tweeted.

Speaking with the Daily Dot, Fischer also argued that YouTube’s action was troublesome regardless of whether it was intentional or automated.

“YouTube’s claim that such content is ‘spam’ fundamentally misunderstands that work covering then-President Trump’s election fraud claims is not the same as promoting such claims,” Fischer said. “Their decision to remove the work was either automated—in which case human oversight and review is unacceptably lacking—or it was human—in which case common sense is unacceptably lacking.”

YouTube did not respond to questions from the Daily Dot on how either journalists’ videos violated its policies regarding scams, deception, and spam.

It did, however, respond to Fischer with an answer that’s more confounding.

“This video was removed bc it didn’t include countervailing views or sufficient context of the claims made in the footage. As videos can be embedded across the web, we only allow this content to remain on the platform if there’s appropriate context within the video itself. …. If you see similar footage on the platform, it’s most likely bc it includes countervailing views or sufficient context, as opposed to just the raw footage, itself,” the company wrote.

But the argument they are using is simply not true. An unadulterated NBC News video, which boasts over 5 million followers on the platform, shows Trump calling on his supports to walk down to the Capitol. It is without context or “countervailing views”, yet it is still hosted on the site. It’s the same quotes from Fischer’s video that got removed.

The Telegraph, with 1.73 million followers, hosts a similar video without “appropriate” context.

Numerous videos of Trump that prompted his removal from social media still abound without context, free to embed anywhere.

It’s simply easier to apply policies to independent journalists, who don’t have the backing or platform to go up against a big tech company.

While the content removal has spurred criticism from several prominent journalists, YouTube has thus far declined to reverse its decision.

“While I can understand Twitter’s desire to mark particular clips from the Capitol insurgency as ‘sensitive,’ to label my entire profile and all of my individual tweets as sensitive is absolutely absurd,” Fischer continued. “It is further frustrating because there’s no notification or explanation and no way to appeal.”

When asked about the warnings on Fischer’s profile, a Twitter spokesperson declined to provide specifics and instead referenced the Daily Dot to its policy regarding “Notices on Twitter and what they mean.”

“America is about to witness an impeachment trial for ‘Incitement of Insurrection,’ and Americans deserve to see images of the alleged incitement and the alleged insurrection,” Fischer added. “Anything short of that access is fundamentally tampering with news, history, and justice.

Similar actions were taken against Daily Dot contributor Zachary Petrizzo, whose footage of white nationalists discussing the Capitol riots—calling on followers to delete evidence—was taken down by YouTube last month. Although YouTube eventually reversed the decision, the company failed to provide any insight on what caused the initial removal.

The violence at the Capitol, spurred by misinformation from Trump and his supporters, led to the death of five people.

The post YouTube is cracking down on independent journalists who covered the Capitol riot appeared first on The Daily Dot.

‘This is messed up’: Mom on TikTok sparks debate with viral video of her ‘favorite child’
Video shows repairman threatening to beat Black customer ‘like a f*cking slave’
Advertisement